This project is an independent explorer of the British Museum collection built by Good, Form & Spectacle.

It was made in February-April 2015 by George Oates, Tom Armitage, Frankie Roberto, Tom Stuart, Harriet Maxwell and Tom Flynn.

It's probably best if you imagine this project like we're skimming stones across a lake.

The British Museum is a venerable institution that opened in 1753, and has been a centre of scholarship since then.

This project is not that. This is a sketch made quickly to explore what it means to navigate a museum catalogue made of over two million records. It's about skipping around quickly, browsing the metadata as if you were wandering around the museum itself in Bloomsbury, or better yet, fossicking about unattended in the archives.

We're also acting on a research theme of Good, Form & Spectacle, thinking about ways to show the shape of an institution itself by looking at how and when things were acquired, where they came from, and who brought them. Simply by shifting the visual emphasis from lists and lists of thumbnails on a search result page, you can start to tell slightly different stories about how things were brought to the institution, and how they naturally group together based on the work of the registrars and curators at the institution. You can see a previous effort to start to illustrate this kind of information looking at the Date Graph on a previous project called the V&A Spelunker.

We'll go in to a bit more detail about how we constructed this "surface" view of the museum's collection on the Code/Data page. In the meantime, please enjoy a wander around, and, tell all your friends about how much fun this is.

Show Everything is a technique we've used in each of our R&D projects. It's usually the first step in trying to understand a big, new dataset. By making something interactive (clickable, navigable) as soon as possible, everyone on the team can start to get a feel for the shape of data, and think about how it can be represented.

Topography of the Catalogue

We've invented a design constraint that we think is particularly apt for, and challenging to cultural institutions, and that's no search box. Search boxes are good for searching everywhere for anything, but, our theory is that it's also really easy to rest on the laurels of a search box, and put all your effort into that instead of thinking and designing a fantastic display for your collection. When we say "topography of the catalogue," it's about knowing and presenting paths into the collection, helping people find their way, and follow their nose (or eyes or ears) to discover things that interest them.

This is a theme that has popped out of the last two projects: the V&A Spelunker and Two Way Street. It's about laying out and presenting metadata about acquisitions as exploratory devices. In the V&A Spelunker, we mapped date_create against date_acquired, and that revealed certain collecting patterns. Here, we're showing when things were collected alongside who they were collected from, and that's interesting too.

It's liberating to approach this dataset with a research interest, because it lets you make things that would be very difficult for an institution to make, certainly as quickly and sketchily as we can. We can make things that are explicitly and wholly about access, and not about control. Two Way Street is about two sorts of access:

We've written more about how we made this lightweight, slightly-cheating-y version of the collection data on the Code / Data page.

The first release of this site (which happened on April 10, 2015 probably a bit late on a Friday afternoon in London) is the first step in what will hopefully be a larger thing. We chose the name "Two Way Street" during a weekend literally at the British Museum as we tried to shape the project into a four-minute pitch in the NESTA Heritage and Culture Open Data Challenge. We weren't successful at that, but decided to go ahead anyway. This first release is all we can afford at the moment, both in terms of time, and money. 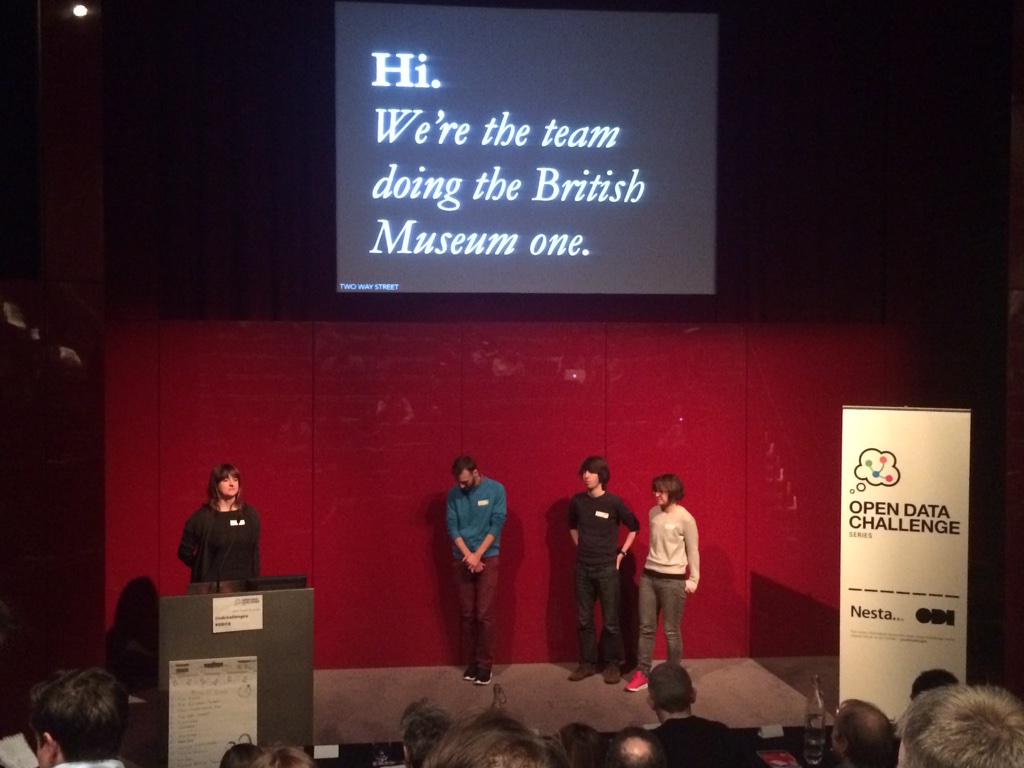 George, Tom, Frankie and Harriet at the NESTA pitch weekend

The Two Way-ness of the name is about trying to create an actual dialogue with a gigantic world-leading institution. One of our original goals was to allow commenting on any object in the collection, but we decided to de-emphasise that for now since managing an online community is very hard and time-consuming. We did achieve our other two main goals though, in this short timeframe: allow radical access to the collection at large, and provide a more user-friendly version of the catalogue for developers. (That's our thin JSON version instead of the huge and slightly-unwieldy-for-web-experiments official RDF version.)

We'd love to hear what you think about Two Way Street. We're @goodformand on Twitter, or you can say hi via our Work Diary contact form.